Crutchlow wins Rossi battle during his ‘ride of the year’

“I think it was the best ride of the year for Cal” – Herve Poncharal.

Cal Crutchlow may only have finished ninth in Sunday’s Aragon MotoGP, but the Englishman’s battle with grand prix legend Valentino Rossi and former 250cc world champion Hiroshi Aoyama was the main highlight of a processional race.

The trio spent most of the race swapping positions, with rookie Crutchlow eventually getting the better of both factory Ducati star Rossi and Gresini Honda rider Aoyama.

Monster Yamaha Tech 3 rider Crutchlow’s stand-out pass was an outside move on Rossi into turn one and he crossed the finish line just 0.180sec ahead of Rossi and 0.345sec clear of Aoyama.

“I’m really pleased with how the race went today because I was back inside the top and having a really good and enjoyable fight with two of the best riders on the grid, who have had a lot of success in grand prix racing,” said Crutchlow.

“What pleases me the most is that I could make up for the lack of speed on the straight in the corners because the Yamaha handles brilliantly and my Tech 3 Team gave me a really good bike today.

“But to hold off Valentino and Hiroshi at the end took a massive effort. I think if they’d started the final lap in front of me on the straight it would have been hard for me to slipstream.

“There are a lot of positives to take from this weekend because I’ve got back in the top 10 on a track I’d never seen before and beaten two guys with a lot more experience than me.

“I gained a lot of experience today riding with Valentino and that has given me a lot of confidence for the next few races.”

Crutchlow’s performance moved him up to 13th in the world championship rankings and was his ‘bets ride of the year’ according to team manager Herve Poncharal.

“I think it was the best ride of the year for Cal,” said Poncharal. “Maybe not in terms of the final position, but the way he rode was fantastic. The start was difficult, but he never gave up and what was really good is that he was riding with Valentino and Hiroshi and he would have learned a lot from those two.

Never has it been so important for Valentino Rossi to show good form at his home race Mugello this weekend. Its not really come togther for Vale and Ducti just yet, although I will be the last man to write the guy off. He is far too talented for that.

However, it is hard to overestimate the importance of this weekend’s Italian MotoGP for Valentino Rossi and Ducati.

The seven-time MotoGP champion will be competing in his first home as a home Ducati rider, at a track where he suffered his most serious injury of his career.

Rossi won at Mugello for seven successive seasons from 2002-2008, before being beaten to third in 2009 and then breaking his leg in practice for the 2010 event.

The Doctor returns with just one podium from his first seven races for Ducati, during what is now his longest losing steak since joining MotoGP – Rossi’s last victory having been at Malaysia 2010, a space of ten races.

But there is reason for optimism ahead of Mugello.

Fourth on his race debut with the new GP11.1 last Saturday at Assen, Rossi has previous testing knowledge of both the 11.1’s chassis and Mugello’s new racing surface.

Ducati, like all manufacturers, is yet to confirm it will utilise the full 1000cc capacity available due to the fuel restrictions and experimenting with several engine sizes would hardly be surprising.

“We’ve ridden there with the GP12, but because our bike is an 800, it responds a little differently to adjustments, and it’s also in its first phase of development,” said Rossi of his private Mugello tests on the 2012 bike.

“It will be vital to quickly find the right path for the setup, as it’s important that we improve in every session in order to qualify in a good position.”

In the past, Rossi has proven more than capable of rising to the occasion for his fanatical home fans and – even without crew chief Jerry Burgess (see separate story) – the 32-year-old knows Italy and Ducati will be desperate for at least a podium challenge on Sunday.

“The track is one of my favourites, and I’ve always done pretty well there,” Rossi continued.

“Returning after last year’s accident is no problem for me, because I enjoyed riding there during the recent tests, as I always do.

“I hope there will be a big crowd and that I’ll be able to do better than we’ve managed until now, because this is a very important race,” he admitted.

Rossi is fourth in the world championship with a best race finish of third, at Le Mans.

Now bearing in mind that Pedrosa is about 20kgs lighter than most of the current MotoGP line up, Crutchlow’s pace in this test is further proof that he will go far in MotoGP….oh and the fact that he is as determined as anyone to be a winner in this sport.

Monster Yamaha’s Cal Crutchlow is more than pleased with his laptime in yesterday’s MotoGP test at Estoril as it was faster than the works Honda of Dani Pedrosa managed in Sunday’s race when he took victory ahead of reigning champ Jorge Lorenzo.

The former footballer set the fourth-fastest time of the session and managed to go into the 1’36s bracket, joining Marco Simoncelli, Jorge Lorenzo and Casey Stoner. He was also faster than Valentino Rossi using a longer wheelbase in the Yamaha than he has in the past.

“Today was really positive and I can’t really ask for much more than finishing fourth quickest with only three of the fastest riders in the world in front of me. I was able to lap nearly two seconds faster than I did in the race but I was quietly confident that the changes we planned to make for today would mean I could go a lot faster,” said Crutchlow.

“Losing so much track time because of the weather at the weekend meant I couldn’t risk taking a gamble on making too many changes for the race. I honestly didn’t expect to break into the 36s but I felt comfortable and even with 25-laps on the same set of tyres I was doing low to mid-37s.

“I know everyone goes faster in a test but my time today was faster than Dani Pedrosa’s best lap in the race and he won, so my pace bodes well for the future. We moved the handlebars and lengthened the wheelbase and I just felt much more comfortable. The bike was a lot easier to ride and much less aggressive and I was fast throughout the whole day.

“If I’d had this set-up for the race I’m sure I could have had a battle with Colin, and he was sixth, so that’s really encouraging. I can’t wait for Le Mans now. It is the home race for the Monster Yamaha Tech 3 Team and today’s result has given me a lot of confidence that I can be competitive again on another track I have to learn from scratch.”

Rossi finally shows off those Ducati leathers….not sure about the yellow with the red 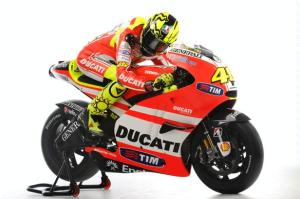 Ducati have today released the first pictures of Valentino Rossi’s MotoGP colour scheme which he will use for the most of next year, save for the doubtless special editions that are bound to surface at Mugello etc. The Desmosedici GP12 is, erm, very red and yellow but not as horrible as his leathers.

Tyres: Bridgestone, front and rear 16.5in